The core component of every injection molding machine is the plastification unit and, within this unit, it is the screw that determines the quality. These screws have come a long way since their original use in transporting materials, and can now be found in a whole host of different applications. That said, it is virtually impossible to find “normal” machines capable of producing complex components such as these anymore, which is why global market leader Engel counts on Weingärtner for its turning and milling machines.

When Ludwig Engel first set up his own, small-scale metalworking shop back in 1945, he probably had high-flying plans like so many company founders out there, but never in his wildest dreams could he have imagined what lay in store for his company. Right from the outset, the ingenious designer and inventor was a firm believer in what was then the relatively new field of plastics processing, and he obtained his first of many patents as early as 1948 for an innovative plastics press. His first, self-designed injection molding machine came to life four years later, and by 1959 the Engel company had hit the market with a full range of these state-of-the-art machines.

Even at this early stage, the company was clearly already a resounding success, although it wasn't until later generations that it achieved its global status (more on this to come). It was primarily Engel's daughter Irene and her husband Georg Schwarz who made exceptional headway with the development of the head office in Schwertberg, Austria, and really drove forward with the internationalization of the company. This role was subsequently taken over in 1997 by son-in-law Peter Neumann, who continued their groundwork with real skill and ambition. At the end of this year, Stefan Engleder (great grandson of Ludwig Engel and a member of the fourth generation) is expected to follow in his footsteps as CEO.

Today, this family company employs over 5200 people around the world, turned over more than EUR 1 billion for the first time in the 2014/2015 financial year, and boasts subsidiaries and representative offices in over 85 countries. With nine production facilities in Europe, America, and Asia, and an export quota of around 95 percent, this exemplary Austrian company has not only earned its reputation as a global player, but also definitely outgrown its label as a mere manufacturer of injection molding machines.

"We see ourselves today as a systems partner to our customers," explains Günther Klammer, Head of Plastification Systems at the large-capacity machine plant in St. Valentin, Austria. He goes on to add, "Our strength lies in our customer-specific integrated solution comprising an injection molding machine, process support, tool project management, automation, service, and training." And when it comes to technology sectors that are not covered by these core competencies, Engel works in collaboration with long-term partners to offer these for its customers.

The large-capacity machine plant in St. Valentin currently employs around 1000 people, who are responsible for manufacturing more than 800 large-scale machines with clamping forces of up to 5500 tons every year. And speaking of "manufacturing", this really can be taken literally. "One of Engel's uncompromising principles is that any components with a direct impact on quality must be made in-house," adds Günther Klammer. "Even if this approach seems to have gone out of fashion a long time ago, we believe that this level of vertical integration is crucial to achieving the top product quality that people have come to expect from us. In terms of cost and quality, this means we are always in competition with external suppliers, which is why we attach great importance not only to producing highly motivated and well-trained employees, but also to keeping the productivity and efficiency of our machine parks at a consistently high level while working constantly to improve this further still."

According to Christoph Rafezeder, Plastification Production Manager, "One of the key factors for cost-efficient production is complete machining of the components, ideally in a single clamping process. This means that, wherever possible, we use the latest generation of turning and milling machines, which are capable of handling the complete machining process for even highly complex parts." And as far as these "highly complex" parts go, there is one particular product group whose complexity and requirements go above and beyond anything else of its kind: the screw shaft, or simply the "screw". This asymmetric, spiral-shaped component places enormous demands on both programming and processing. Its geometries have become so complex, in fact, that not one 3D CAD system out there has been capable of designing them until now. Klaus Geissler, Head of Sales at Weingärtner, explains, "We have developed a software package that can be used to program all known screw geometries. The market has never seen a CAD/CAM system as pioneering as this one, and the closest thing to it functions in the same way as our weinCAD® programming tool. The way this system works is by calculating the contour of the screw channel based on set parameters such as tools and manufacturing methods."

The convenient Weingärtner programming tool alone would be a good enough reason in itself to rely on a machine of "made in Kirchham" quality for all screw production applications, but it's by no means the only one. Klaus Geissler goes on to add, "We see ourselves as a system supplier in this sector, covering all requirements from software and first-class machine technology right through to tool design."

What we've heard so far is not simply a case of paying lip service; the truth behind these words is clear to see in the production of screws at Engel's St. Valentin plant. The star of the show here is the Weingärtner mpmc 600, which is used to mill each and every screw with a diameter of 18 to 170 mm. This is by no means an easy task, given that the developers in the plastics industry are extremely creative when it comes to designing innovative geometries (more on this later) or using unusual materials for extruders. In fact, the range of materials extends from high-quality nitriding steels and tool steels right through to additionally armored or coated screw blanks. Explaining why so much variety is needed, Günther Klammer notes that, "The requirements placed on the screws are incredibly high. On the one hand, the plastics in use are often reinforced with highly abrasive elements such as glass fibers; on the other, the short cycle times result in high dynamic loads, not to mention chemical stresses."

And in reference to the geometries, he goes on to add that, "Around half of all screws now have barrier geometries, which means that a second screw flight separates the melt from the remaining granulate with a barrier flight. This is a shape that other techniques, such as polishing, can no longer replicate, or at least not without a great deal of effort."

The basic parameters of the mpmc 600 speak for themselves, with 54 kW, 5734 Nm, and 1600 rpm in rotary operation, and 6048 Nm and 20 rpm in C-axis operation on the main spindle. The milling unit comes complete with a power rating of 30 kW and a speed of 12,000 rpm. In rotary operation, the milling spindle is mechanically clamped and the spindle bearing is released to prevent damage caused by vibrations and impacts. The B-axis is infinitely variable and can be fixed in any angular position. As for meeting the high demands for precision, all working axes are equipped with direct measuring systems and all relevant motors are water-cooled for thermal stability. The temperature of the circulating oil lubrication for the drive units is also carefully controlled.

And as if these reasons alone weren't strong enough selling points for the mpmc 600, Günther Klammer has a few more benefits up his sleeve: "The Weingärtner machine stands out from the crowd thanks to its exceptional stability and rigidity. At the same time, the impressive kinematics of the machine facilitate an interpolating machining process covering up to five axes. For us, this opens up a new sense of freedom in screw production." But the plus points surrounding the machine are just one aspect, as Klammer continues to say, "Ultimately, Weingärtner sets itself apart as our capable partner that not only dominates in the field of mechanical engineering, but also supports us in all aspects of application technology. Even their soft factors such as training and service are of the highest possible standard."

So, is that happy faces all round thanks to the mpmc 600, then? A clear yes - albeit with a single reservation. The mpmc 600 does seem a little oversized to process smaller screws. It also runs in four shifts, so it is used around the clock. Key decision-makers at Engel and Weingärtner therefore exchanged ideas on a more appropriate design for an additional machine for screw diameters of between 18 and 90 mm.

These ideas (obviously) didn't stay confined to the drawing board, and Weingärtner went on to design a specific machine to handle the complete machining process for smaller screws based on Engel's requirements. This is currently being built in Kirchham, although it will ultimately be installed in St. Valentin. But that's another story. 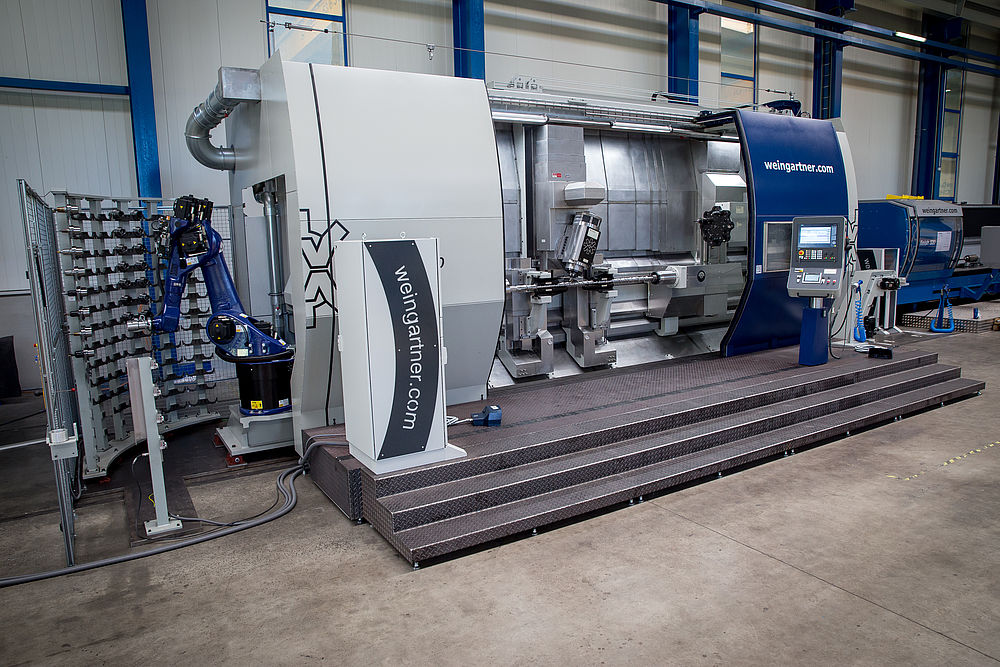